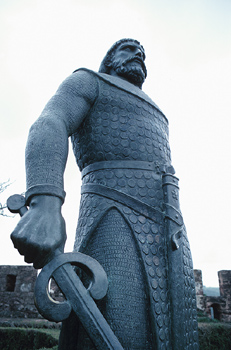 For those of us who have been engaged in this awful, must-win struggle against violent sociopaths, Landclaim Terror deniers, a corrupt police force, and fearful, appeasement-minded politicians who would destroy the Rule of Law and democracy along with it this is truly a day to remember for this is the day that a champion has thrown down the gauntlet to take up our cause.

John Tory has released part of his election platform today saying, “Under a PC government no one will be beneath the law, above the law or beyond the law.” Even better, he released it in a speech to the Ontario Association of Police Services Boards convention just one day after OPP Commissioner Julian Fantino told the same group, “There is no two-tier justice system in the OPP.” The Conservative’s ‘One Law for All’ commitment is hard-hitting, no-nonsense and a wonderful shot in the arm for the struggle against Two Tier Justice and Landclaim Terror.

Congratulations to Mr. Tory and the Conservative Party for listening to the people and grasping what Dalton McGuinty has not – that Canada is a nation of laws, not thugs. It is a sad commentary on the shameful cowardice of our current political and policing institutions that the Rule of Law and equality before the law has been made a key plank in a party’s election platform – surely a first in Canadian history!

We should all especially thank MPP Toby Barrett for having the courage and wisdom and faith to appear at the first March for Freedom event on Oct 15/06; for being there with Bo Chausse when he became the first Canadian arrested for trying to raise a Canadian flag; for encouraging Caledonians to reach out to fellow Canadians; for making the Queen’s Park Media Studio available to us for The Ipperwash Papers and FantinoGate; and for being part of the Caledonia Convoy.

Obviously, Toby took our message to the Conservative caucus and made them understand what was at stake for Caledonia, for Ontario, even for Canada should the Rule of Law be further abused by the Liberals and the OPP.

Thank you Mr. Tory. Thank you Mr. Barrett. Thank you to the Progressive Conservative Party. Thank you all for joining the fight to halt our province’s descent into the abyss of anarchy. I will sleep better tonight knowing that a brave young lady on the Sixth Line in Caledonia is a step closer to feeling safe in her home again.

I thought you might be interested in John Tory’s recent news release on the rule of law.

If you want more information on this policy direction from the Official Opposition, please let me know.

TORY SAYS THERE MUST BE ONE LAW FOR ALL

Under a PC government, no one will be beneath the law, above the law or beyond the law

(Owen Sound, ON) – A Progressive Conservative government would ensure there is one rule of law for everyone in Ontario, John Tory announced today in a speech to the Ontario Association of Police Services Boards Convention.

“The fact is that right now, across several fronts, we do not have one law for all. And I believe that this must change,” said the PC Leader. “Nobody can be forgotten. Nobody gets to opt-out. Nobody gets to live beyond the law’s reach and protection. All of this is possible only if the rules of the game are consistent, stable, equitable and fair.”

In his speech, Tory said a PC government would ensure “one law for all” by focusing on three principles. In the first, Tory said that no one should be beneath the law.

“We must do everything it takes to protect the disenfranchised, the poor and the vulnerable portions of our population. We must ensure they are protected under the same law as applies to everyone else and that they have equitable access to justice,” said Tory. He pointed to the PC Time for Action plan to combat youth violence which included a number of measures to help youth and families and prevent crime.

The second principle is that no one should be above the law, whether it is regarding a political protest, a labour dispute or any other issue. “The Premier of Ontario must be prepared to vigorously pursue new tools and new measures to ensure all parties comply with the rule of law.  Simply standing by and allowing land occupations and railway blockades or other disruptive demonstrations that defy court injunctions just cannot be an option.”

Tory said he is prepared to pursue civil remedies against anyone who leads a protest that crosses the line between free speech and disregard for public safety, and the rule of law.

“We will undertake to develop new tools and protocols for government to protect the public interest – whether it is in situations where people are concerned about environmental projects, a land claim, or any other matter,” said Tory. “There needs to be a better way to manage dissent in Ontario. It comes down to leadership.”

Under the third principle, Tory said no one should be beyond the law, whether it’s organized crime, gangs or white-collar criminals. In the case of white collar crime, Tory said a PC government would get serious about investigating, prosecuting and adjudicating securities fraud and other white collar crimes.

“By insisting on one law for all, I believe we could see real progress,” said Tory. “More importantly, in doing so we would create a fairer, safer and more equitable society for all of us.”

Like Loading...
This entry was posted in 1. VoC's MOST IMPORTANT POST, Courage & Cowardice, Leadership, MUST SEE, Native Protests - Caledonia, Native Protests - Ipperwash, One Law for All!, True North - NOT free!. Bookmark the permalink.