Posted on November 27, 2010 | Comments Off on MP Diane Finley ‘Caught in the Middle’ as Liberal MPs question her signature on anti-Fantino petition in House of Commons

The headline of this Globe and Mail piece by Jane Taber is rather misleading (it leads readers to conclude the Liberals made a serious effort to recruit Julian Fantino for themselves), but some important news is found further down in the article itself where Taber reports that on Nov 25/10 Fantino’s conduct in Caledonia was, for the first time in five years, the subject of discussion in the House of Commons thanks to two Liberal MPs who wondered why – given Fantino’s candidacy for the federal Conservatives – MP Diane Finley’s signature was on a 2009 anti-Fantino petition circulated by Haldimand residents.

And Thursday two Liberals [MPs Rob Oliphant and Maria Minna] – stood up in the Commons to attack Mr. Fantino over his handling of the native protests in Caledonia when he was the OPP commissioner. They noted that Human Resources Minister Diane Finley, whose represents the troubled corner of Ontario, had signed a petition calling for an inquiry into Mr. Fantino’s actions.

“The member was a minister when she signed a petition demanding the Prime Minister’s hand-picked candidate in Vaughan, Julian Fantino, be investigated. She wanted his pay docked,” Toronto MP Maria Minna charged. “She wanted him suspended and she wanted him fired. Does she still hold the same view now?” 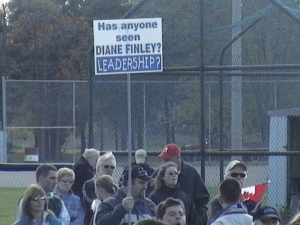 Diane Finley is the wife of Senator Doug Finley who happens to be one of Stephen Harper’s closest advisors. Signing the petition is about the only positive contribution she and the federal Conservatives ever made with respect to putting an end to Fantino’s outrageous policing practices in Caledonia and Haldimand County.

As can be seen in the photo (above) taken at Gary McHale’s inaugural March for Freedom protest Oct 15/06 residents were so distressed at her lack of interest in their plight they began posting and carrying signs wondering where she was, hence the excitement at her signature on an anti-Fantino petition:

According to the two Dunnville Chronicle articles Diane Finley evaded answering reporters’ questions about whether or not she had signed the petition, but the other reports confirm it, and Caledonia resident Merlyn Kinrade witnessed her signing it at MPP Toby Barrett’s New Year’s levee.

While I was grateful at the time to Diane Finley for signing the petition I must join Mr. Oliphant and Ms. Minna in wondering why the Conservative Party of Canada sat otherwise quiet all this time given her knowledge of the pain her constituents were feeling at the hands of Fantino’s racist policing policies, and why Harper annointed him for the riding of Vaughan – despite the party being warned to wait for Christie Blatchford’s book Helpless to hit bookshelves first.

Barb Patterson-Tuck’s ‘Caught in the Middle‘ portrays Stephen Harper as one of the ‘Hear No Evil, See No Evil, Speak No Evil’ monkeys in her award-winning portrayal of the Caledonia crisis – 2 years before he welcomes Julian Fantino (shown as one of Caledonia’s tormenters on the left side of the ‘flag’) as the party’s candidate in Vaughan.

It seems deliciously fitting that it is Stephen Harper and Diane Finley who are now ‘Caught in the Middle’ instead of the people their party abandoned, and then slapped in the face with their Fantino nomination.