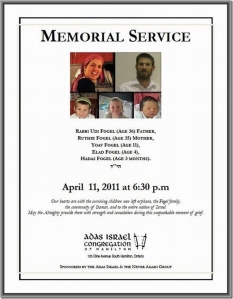 The massacre of five members of the Fogel family a week ago sent shock waves through Jewish communities around the world. Three small children aged 11; four and just three months old were savagely murdered in their beds. The parents, Udi and Ruth were also murdered. […]

Details of the grisly massacre have been revealed. The murderers stabbed the mother after she saw her husband and baby with their throats slit. The other two children clenched their little fists as they were brutally stabbed to death in their beds. They clenched their fists, what else could they do against these men armed with knives? The murderers missed one of the bedrooms so the two-year-old and the six-year-old were spared death; instead, they found their parents and siblings, lying bloodied and dead. The 12-year-old daughter who had been out with friends came home to find her two-year-old brother screaming over his parents bodies.

Last night I attended a memorial service for the Fogel family which was slaughtered in their home like animals by Palestinian butchers on March 11/11. It was a simple, moving ceremony which looked to the future to a day without such hatred, but one speaker – Gary Gerofsky of the ‘Never Again Group’ – struck a resonant chord with his quiet, but firm condemnation of Jewish leaders who refuse to support those in the community who actively confront those who lie, hate, and incite against Jewish people and the state of Israel and who, by doing so, get in the way of the productive activism needed to counter what Gerofsky calls the “Islamist and radical leftist hate.”

As someone who works to counter appeasement of native extremism and hate supported by the very same radical leftists, anarchists and anti-Semitic groups I knew, halfway through Gerofsky’s speech, that I was compelled to ask if he would allow me to post his words here on VoiceofCanada.

(Note: the bolded text is in the original. I took the liberty of adding the title since Mr. Gerofsky provided me with his raw notes that did not include a title).

As we gather here today to memorialize the Fogel family, I am reminded of the 1972 Munich massacre of eleven Israeli Olympians by Fatah. I am also reminded of the 1985 Achille Lauro hijacking where wheelchair-bound American tourist, 69-year-old Leon Klinghoffer, was killed by Palestinian terrorists. I also recall the countless terrorist bombings, wars, and “intifada’s” that the Palestinians inflicted and continue to inflict on Israelis in Israel and on Jews internationally – a military and ideological war that has gathered strength over the years but began long before the so-called Israeli “occupation” existed. Now the issue of disputed land is used as the excuse to justify savage killing. The Arabs own more than 99% of the Middle East along with the valuable resources and so land is not and has never been the real issue.

The insane murder by slashing and stabbing of the Fogel babies and their parents, perhaps the most gruesome slaughter in a long list of horrific attacks against Jews spanning generations, was inhuman. What did sleeping babies do to enrage lunatic savages? Why is it not a given that Jews have a right to live in Judea and Samaria and wherever else they so choose? Why are Jews not allowed to live in Muslim countries when Muslims insist on flooding Israel with millions more refugees than the 1.3 million Muslims now inside Israel? Why are Muslims not asking questions about their incitement to hate in their places of worship and schools? Why is debate, discussion and criticism of Islamic hatemongering and violence being prevented and deterred? How did jihad against Jews and Christians somehow become a religious right? Why is the world mostly silent when Palestinians terrorize Jews and Christians? Why are expectations so low regarding Palestinian behaviour that it secures them a free pass to continue killing unabated? Why would Israel want to live next to people who want Israelis dead; people who hand out candies and celebrate in the aftermath of brutal murder?

We have seen terrorism many times in the past and our response to it has not always been strong nor directed towards putting an end to it. At this point in history we cannot afford to be silent; we cannot afford to be weak. We cannot say to each other, “What are OTHERS going to do about it”, “What can WE do to make them stop hating us?”, “How can we dialogue with them in such a way that they will understand and love?” “What more can we give them to prevent future terrorism against us?” The answer from Islamists will inevitably be: “When you are dead, we will thrive and then we will be at peace without you.”

Is there hope? Is there room to negotiate? I would say that there is both hope and solutions but we as a people must be more demanding, more cohesive, more intelligent and more cognizant of reality. We must stop our habit of seeking love from a cold world. We need to point out our strengths, our contributions to the world in terms of science, medicine, the arts and, yes, to peace. We have grown complacent as a result of the precious freedom we enjoy in wonderful countries like Canada; forgetting the harsh realities of life in Israel. We sometimes falsely assume that peace rests exclusively on Israel’s shoulders and wrongly think that Israel does not try hard enough to solve the impasse of the inappropriately-named and moribund peace process. We must once again extol the goodness of Israel in the minds of our children, students and fellow citizens – unequivocally, with pride and dignity. We need not accept leaders who excuse demonization, congratulate themselves for inaction and get in the way of activism. As Jewish students strain under the pressures of modern anti-Semitism on campuses throughout Canada, our timid and equivocal leaders fail to give them the moral and financial support and guidance they desperately need. We sometimes fail to demonstrate our own love and pride for Israel that is the essential foundation in the fight against Islamist and radical leftist hate.

Today we are bombarded by lies, historical revisionism and demonization that compares with Nazi propaganda. The baby killers of Itamar are, to me, the modern versions of our old enemies. Jews are easy targets – with only 15 million of us whom 1.5 billion seem to be targeting. The UN, in defiance of logic, sanity and reason, has given radical Islamists a legal and moral stranglehold over all of us and now tries to prevent Israel from defending itself. Criticism of murderous acts by Islamists is being made illegal– giving terrorism cover, credibility and justification. We must protest loudly instead of finding accommodation with those who have chosen us as their enemy.

I belong to the Never Again Group which I am sure you have heard of by now. We are not alone; our group also has friends and members from the Christian community, some here to lend their support today. We have been called “Macarthyites,” extremists and told that we are a fringe right-wing group when in fact we have done nothing more than defend Israel and challenge those who attack us. If that makes us a fringe group in the minds of some people, then so be it, but these labels will never deter us from speaking up whether it is about the slaughter of babies in Itamar or the lies motivated by prejudice, given shelter and encouraged by haters of Israel in our universities and in the general community.

The death of one more family in Israel at the hands of terrorists must strengthen our resolve to defend our own people.

Abbas’ professed dismay over the slaughtered Fogel babies are nothing more than contemptuous crocodile tears given his wistful desire to wage war against Israel if other Arab nations would join in, and given the Palestinian authority’s repugnant use of official media sources to incite hate and violence against Jews:

“If you want war, and if all of you will fight Israel, we are in favour. But the Palestinians will not fight alone because they don’t have the ability to do it.” PA Chairman Mahmoud Abbas to Arab League Summit, March 2010.

Palestinian Media Watch does an outstanding job of monitoring official Palestinian sources as they train children to hate Jews and Israel:

The Palestinians pump out a steady diet of official anti-Semitic hate drivel designed to incite violence, yet the lunatic Left would have the uninformed and gullible believe that it is Israel that is the instigator/oppressor in the Middle East. I highly recommend that readers unfamiliar with the circumstances surrounding the creation of the state of Israel (by UN vote!) and the persistent attempts by Arabs to destroy her read this key VoC reference: 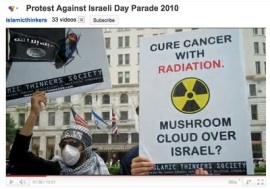 You’ll then realize that the communists and leftist neo-fascists have been dissembling to cover the tracks of murderers and genocidal maniacs — again. And, all the while, those who ‘don’t want to make waves’ try to marginalize activists like the Never Again Group (whose members include Christians) who do sound the alarm. I always wondered how the Germans managed to get 6,000,000 Jews to delude themselves into gas chambers when the signs of their impending demise were present right from the beginning of Hitler’s rise to power. Now, I have the agonizing misfortune of watching the same self-delusion repeat itself barely 70 years after my parents watched Nazis take Dutch Jews away to their deaths.

As I said to more than one Jew in the past few weeks: What, six million weren’t enough to teach you to fight back when you have the chance; you’re waiting for twenty million?

Thankfully, some Jews and Christians aren’t willing to wait that long.