Blatchford on McHale bail hearing: ‘law in Haldimand County operates as the law in America’s Deep South once worked’

“…the law in Haldimand County operates as the law in America’s Deep South once worked, where there was one law for the white man, who could break it with impunity, and another for the black man. In Haldimand County, since the occupation began, there has been one law for natives and another for non-natives.”  Christie Blatchford, Globe & Mail, May 04/11

On Wednesday, May 04/11 I was present at the Cayuga courthouse  where Gary McHale was representing himself at a hearing into the bail restrictions imposed by the OPP after they arrested him for allegedly assaulting Tom Keefer – the ringleader of the anti-Caledonia coalition of unionists, anarchists, anti-capitalists and anti-Israel crowd that has supported native lawlessness in the Haldimand Tract since 2006.

Helpless author Christie Blatchford was there, too, covering the hearing for the Globe & Mail. She wrote what is simply a ‘must-read’ article that included strong commentary on the regressive nature of the OPP/McGuinty civil rights abuses in Caledonia as revealed by the unmitigated silliness of the testimony by McHale’s arresting officer – Detective-Constable Wesley Barnes – who had testified in an earlier bail review session on April 19/11.

The Crown, after reviewing the transcript of the officer’s testimony during the lunch break on Wednesday, decided to drop all travel restrictions against McHale. After reviewing the excerpt below readers will understand why.

Blatchford on the ‘ridiculous’ testimony by McHale’s arresting officer

“Last month in the Ontario Court of Justice, Mr. McHale attempted to vary his travel restrictions, and in the the course of a lengthy proceeding, questioned OPP Detective-Constable Wesley Barnes, the man who had arrested him and drawn up the colour map laying out his own personal no-go zone. Now it may be that there is somewhere a police officer who has looked more ridiculous by this own testimony, but I can’t think of one offhand.”

Here is an excerpt from the testimony by Det.-Const. Barnes on April 19/11 during cross -examination by Gary McHale. It begins at the bottom of page 43  of the transcript (page 44 of the PDF doc):

Q. Can you explain why I can’t go to that particular intersection?

A. Because there have been protests there before, sir.

Q. Can you name when?

Q. Can you name who did the protest? 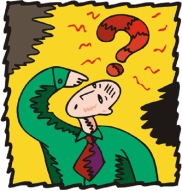 Q. So are you, are you even aware whether Tom Keefer was there?

A. I’m not aware of Tom Keefer…

Q. Or were you, are you aware that I was there?

Q. So in actual fact, you’re unaware of whether or not any of the witnesses, or a victim, or me were at this unspecified rally that you get, don’t have a date for?

A. Or it wasn’t a rally. It was a confrontation, not a rally.

Q. What was the confrontation?

Q. Then how do you know there was one?

A. I was working that day. There was something happened.

A. I don’t recall the specific day, sir.

Q. This is, this is really quite vague.

A. It’d be sometime since I came back from August.

Q. You’re working on a day, you can’t describe what took place, don’t know who’s there, can’t remember the date, can’t describe the confrontation, but something happened  to say that, enough for you to say that I should be restricted from that area?

A. It’s be sometime since August, when I returned to Haldimand County, around August, I think the second week of August.

Q. What’s at that spot that would cause a rally?

Q. So let’s take the McKenzie and York Road intersection. What happened over in that area?

Eventually, the Crown objects to the continuing focus on the officer’s lack of knowledge about his reasons for restricting McHale’s travel within Caledonia and the judge overrules the objection saying:

“I, the Officer’s saying he used it as a geographical boundary to, probably to encompass a particular area that he’s referring to. Conversely, McHale is suggesting that if there’s been no history or any issues over there, why does it, necessary to prevent me from using that roadway. I, I think it’s important to appreciate that an officer in charge, setting terms and conditions, would be able to justify the restrictions that he is imposing, and I think Mr. McHale is challenging some of those, some of those conditions. And, Mr. McHale, I would agree that you, your issues raised are, are important.”

“In the Ontario government’s continuing war on Gary McHale, the day will stand as another small notch in his belt.” 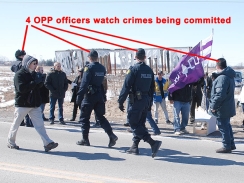 “…it’s also clear that the state remains interested in stopping or silencing him – not because of anything he does, but rather because his presence irritates natives and their supporters such that, God forbid, passions may be inflamed and people reminded of the shame which unfolded here.”

1. Well said, Ms. Blatchford, and thank you for taking time to travel to Cayuga to watch the latest episode of racial policing exposed. Even though Tom Keefer, the alleged victim, lives in Toronto and even though the alleged assault took place at the south end of town, nowhere near the Lions Hall where we have held the majority of our rallies, the OPP’s Det-Cst. Barnes made the Lions Hall off limits to McHale. Clearly, the restrictions were not designed to protect the alleged victim, but rather they were intended to prevent McHale from organizing and speaking at protests in Caledonia.

2. McHale made a point of thanking the Crown Attorney on the record for doing the right thing after reading the transcript of the OPP’s foolish attempt to once again abuse their authority to silence free speech. In the past the Crown has been all too willing to go along with the OPP’s nonsense, so it was quite a pleasant surprise when she agreed to end the travel restrictions. I thank her, too.

3. One of the key issues also raised by McHale, as shown in the transcript, is the OPP laying of a charge against the victim (McHale) of a trespasser (Keefer) in the first place in direct defiance of the Criminal Code. While Det.-Cst. Barnes arrested McHale for exercising his lawful right to remove trespassers from private property under Section 41 of the Criminal Code, he did NOT charge Tom Keefer with trespassing or charge him with assault after resisting McHale’s attempt to remove him. 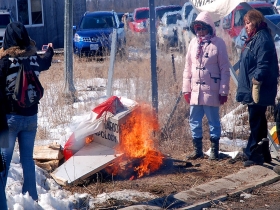 Despite having received complaints Barnes has also refused to lay charges against the native man who assaulted me on Feb 27th, and who assaulted Jeff Parkinson on March 27/11 was filming the native destruction of our Truth & Reconciliation ‘Apology’ monument.

The OPP has consistently refused to protect non-natives from native occupiers and/or their anarchist supporters – just look at the pictures and watch the video from our two Truth & Reconciliation rally where the OPP watched as we were swarmed and our Apology monument stolen, destroyed and burnt, along with our Canadian flag. If you watch closely, you’ll see a man drag our monument off the middle of the road after it was kicked there by a crazed native woman – he’s a plainclothed member of the OPP’s Provincial Liaison Team.

On Feb 27/11 it was the anarchists/anti-Israel/anti-capitalist crowd that the OPP allowed to harass us after refusing to remove them from the private property we were on – which we were forced to relocate to in the first place because they refused to separate them from us even though they were notifed these radicals were being bused in to confront us.

We are making progress, but make no mistake about it: OPP race-based policing is as alive and well in Haldimand County as it was on Feb 28, 2006.

3 responses to “Blatchford on McHale bail hearing: ‘law in Haldimand County operates as the law in America’s Deep South once worked’”