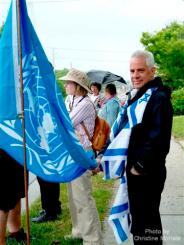 Letter to London Free Press submitted by resident, Jacob Peretz, who was the first member of the London Jewish community to show support for the Blue Beret vigil outside the London (Muslim) Mosque, on Day 3 – June 25/11 (I have made some minor typographical corrections).

Jacob sent a copy to me after it appeared in the LFP.

I would like to submit a letter Letter to the editor July 5, 2011. The London Free Press (LFP), daily coverage of the “Canadian boat to Gaza” is shameful as is the voyage itself.

Billed as a humanitarian voyage to aid the people of Gaza against “Israel’s illegal blockade of Gaza”, this trip is nothing but a provocation against the legitimacy of the state of Israel. The people of Gaza are proud to say that they democratically elected this Hamas government and the world has to accept their votes. These people then have to live with the consequences of a government bent on the destruction of Israel and the elimination of the Jewish people all over the world.

After absorbing thousands of rockets on its people and homes near the Gaza border, Israel implemented a blockade to prevent Hamas from acquiring even more sophisticated weapons into their territory and use it against Israel.

There is nothing illegal in preventing murderers from trying to kill your people.

If these activists really want to help the Gazans, they should not support this terrorist monster, Hamas, as it is ruthless against anybody not going their way, even the people of Gaza.

This voyage is just another in a long chapter of anti-Semitism, hiding behind human rights causes that flaunt their hatred against Israel.

And the LFP is giving them the stage from its pages.

There is a UN blue beret veteran demonstrating in front of the Mosque on Oxford daily [to protest] the fund raising done there to raise money for this voyage of hate.

Twice the LFP interviewed him but his story never made it to the paper.

Shame on you LFP for showing such strong support for a shameful exercise and not showing the opposite view.

Dear Jacob:
You are an inspiration to me!
You were the first London Jew to come out to stand with me, and I think more will be coming. I had a fellow stop to talk to me today. He looked as though he was from the Middle-East. He said, I am from Israel and I want to thank you. I saw you here for days and had to stop to say how honoured I was by what you are doing. He wanted his picture taken by the UN flag, and then we talked. His name is ‘Sagi.’ 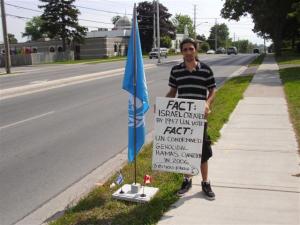 I told him about you, Jacob, about how you were the first to say ‘I will not be afraid anymore.’
I attended several Holocaust remembrance events in 2007, at one of which I actually got to meet (shivers down my spine just writing it!) Sarah Sybil Niemoller Von Sell – the wife of Pastor Martin Niemoller.
At the other one (a screening of a film about Simon Wiesenthal) I heard one after the other get up and say ‘NEVER AGAIN! NEVER AGAIN!’ and I wanted to stand up and scream ‘IT  IS HAPPENING AGAIN, 1/2 HOUR FROM HERE – IN CALEDONIA – AND WHY ARE YOU SILENT?’ but I didn’t. To their great credit, the Never Again Group from Hamilton were the first to stand with us on June 19/11, the historic day when the Ontario Provincial Police protected our rights, and the natives stood respectfully as we exercised them after a 5 year struggle:
I asked Sagi this: How can any of us dare to point fingers at the Jews and Gentiles of 1935 and say ‘YOU should have stood up! YOU should have disobeyed illegal orders! YOU should have risked your life to defend freedom!’ but I AM TOO AFRAID to speak in the freedom of today’s Canada because I may be criticized, because the Muslims in London will be upset if I protest against their role in furthering a mission, if successful, will lead to more innocent Israeli and Palestinian deaths?
.
He said, “You’re giving me tears in my eyes,” and agreed. The bottom line for us is that if we do not speak now, then when?
.
Thanks again for your support, Jacob. You spoke out, and I’m sure it wasn’t an easy decision. I’m so honoured to know you.
Shalom,
Mark
.
P.S. LONDON FREE PRESS PROTEST: I will be at the mosque every day 10-11 as usual, but on Monday or Tuesday (TBA) I will be holding a rally in front of the LFP to protest their biased pro-Palestinian coverage. Members of the Never Again Group will be coming from Hamilton again, as will members of CANACE to support the Blue Beret message and, I will be announcing the formation of a new group: ‘Blue Berets for Peace.’  Hope to see you there
.
If you’d like to be on the Blue Berets for Peace mailing list, send an email with ‘Blue Beret’ in the Subject heading to mark@blueberet.ca  .
—————————–
POSTED BY: Mark Vandermaas
Editor, VoiceofCanada
info@voiceofcanada.ca