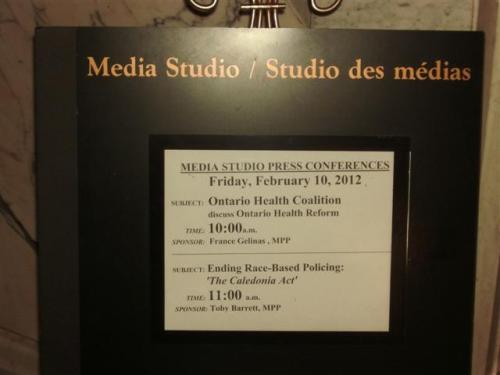 That was the title of an historic news conference took place in the Queen’s Park Media Studio this past Friday, Feb 09/12 where CANACE and the Caledonia Victims Project presented our Caledonia Act recommendations for resolving the Caledonia crisis and preventing future breakdowns in the rule of law due to police/government refusal to protect innocent civilians during future landclaim lawlessness.

The Media Studio was made available to us by Haldimand-Norfolk MPP Toby Barrett.

SPEAKERS (in order of appearance)

Note: there were technical difficulties with the video recording made of the conference. We are hoping to resolve them so we can post video but, for now, we can offer audio for three of the speakers in addition to their notes.

1. Gary McHale of CANACE (Canadian Advocates for Charter Equality) explained that the conference was called in response to the arrests of the Caledonia Eight on Dec 03/11 while walking on a county road through the occupied Douglas Creek Estates, and the subsequent arrest of Gary McHale on Jan 27/12 after he and Caledonia resident Randy Fleming erected a sign at the occupation site which said, ‘NO JEWS ALLOWED BY ORDER OF MCGUINTY’ to draw attention to the reality that the exclusion of non-Natives from the site applies to all races.

He also condemned the racially-biased Ipperwash Inquiry, nearly five years after we held our first press conference in the same room to release our Ipperwash Papers project [ALSO]:

Stuart Laughton of the Never Again Group, in an inspiring, eloquent and reasoned speech, endorsed the ‘NO JEWS ALLOWED BY ORDER OF MCGUINTY’ sign erected at the occupation site and called on the McGuinty government to end racial policing by arguing for equality and protection of the ultimate minority group – the individual.

Miroslav Marinov, a Toronto blogger who has made several trips to Caledonia to see racial policing in action with his own eyes, described Stuart’s presentation thus in an email to me: “Stuart Laughton’s short speech is one of the best analyses of legal and social consequences of Ontario government’s policies in Caledonia.”

Quite right, and it would be a dis-service to readers to provide selected quotes from Stuart’s speech. It simply must be read in its entirety:

3. Kristin Kaye of the Caledonia-based Regional News spoke of how she was shoved by an OPP officer while attempting to take a photo of the arrest of Gary McHale at the Jan 27/12 protest, and closed her remarks with a shocking statement about how an OPP officer had tried to intimidate her into not speaking by telling her that to do so would be a ‘breach of the peace’ the very justification used, for example, to arrest non-natives for attempting to walk down the road with a Canadian flag, as were McHale and I on Dec 16/11.

That’s when I was shoved by an OPP officer. I fell into a nearby car and he asked rudely “What are you doing?” I told him, “I’m press and I’m trying to do my job.”

Before I continue, I would like to apologize for the language in the following statement, but I want to present this situation exactly as it happened.

The officer replied with, “That’s fucking wonderful. Keep away.” At that point, I was stunned by his actions but I asked for his name and badge number. He just blinked at me, so I reminded him that he just pushed me, and asked for it again. This time he walked away. […]

I was shaken to my core by these events. We grow up taught that the “men in blue” are friendly and to be trusted, our defenders. I did not feel protected or defended that day. I did not even feel like a human being. […]

Last Wednesday I was phoned at my home by John Murray of the Haldimand detachment of the OPP. He tried to intimidate me into not speaking to you today and told me that if I did I would be in breach of the peace. As a journalist I am appalled by this because it is the ultimate in trying to silence my freedom of speech. And, obviously, today, I refused to let that happen.

NOTE 2: Ms. Kaye was speaking as an independent reporter, and not on behalf of any other party, nor was she endorsing any other speaker at the conference by her presence or words.

4. Mary Lou Ambrogio, VP of the Canadian chapter of the International Free Press Society gave a ‘connecting the dots’ speech in which she compared the police refusal to protect her organization’s right to have Ann Coulter speak at the Ottawa University to the actions she saw when she and IFPS Communications Director Al Gretzky visited Caledonia for a CANACE/Caledonia Victims Project protest in early 2011.

In March 2010, IFPS brought Ann Coulter to Canada. The cancelled Ottawa event made international headlines when bullies chose to silence an opinion they disagreed with. They formed violent mobs to shut down Coulter’s appearance. But where were the security forces to protect right to speak, our right to have her speak and the rights of those who wanted to hear her speak? They were observing neutrality between the lawless and the lawful, as George Jonas said at the time.

This experience found us taking a closer look at Caledonia. We realized that what happened to us was borne out of the same thinking being applied by authorities in Caledonia, where if one group wants to inhibit the rights of others, the authorities will appease the potentially violent group and simply ignore the rights of the law abiding.

If authorities were getting away with selectively applying the rule of law in Caledonia, we knew this could eventually threaten all of our freedoms so we began to work with those in Caledonia who were standing up for Rule of Law. We noticed many commonalities as we began connecting the dots with our Caledonia friends.

The conference was historic in that it represented the first time in over 5 years that Caledonia activists were joined at a Queen’s Park news conference by other NGOs to demand an end to racial policing in Ontario. Representatives from both groups – including Stuart Laughton of the Never Again Group and Mary Lou Ambrogio of the International Free Press Society – have visited Caledonia to see racial policing for themselves.

Spectators in the gallery included:

Thank you to MPP Toby Barrett

I would like to offer my thanks to MPP Toby Barrett for making the Queen’s Park Media Studio available to us yet again.