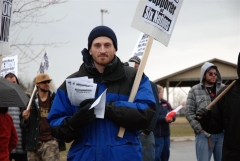 For 5+ years I have been proud to have worked with a small group of people who have done our best to document the crimes committed by both the police and native militants in your town as well as help you understand the role of the non-native radicals who have used native people as proxies for their own anti-capitalist, anarchist agenda. Tomorrow the people who terrorized your town and those who supported them will march in a propaganda effort to convince the victims they created to submit to their twisted logic that you were responsible for the violence against you and your town.

We are intimately acquainted with Mr. Keefer and his gang of anarchists, Marxists, radical unionists, and anti-Israel groups who have been supporting the lawlessness in Caledonia since nearly the beginning. They have consistently mounted vicious smear attacks against us for daring to peacefully and lawfully speak out for both the native and non-native victims they helped create, and would prefer to ignore.
Here are some facts about Mr. Keefer, land claims and the groups he supports:
1. Tom Keefer’s flyer: info re our march onto DCE is WRONG:
I will provide some references below for you to judge Keefer and the validity of the other claims in the flyer he paid to have delivered to your homes, but let me first point out that he can’t even get the most basic facts right about the main ‘reason’ he offers for shutting down Caledonia tomorrow.
He claims that “on February 19, 2012, Gary McHale…marched onto the reclamation site” and the next day a young man tried to commit suicide by driving a car into the house on DCE. In fact, our march onto DCE occurred on Feb 18th, not the 19th. Here is one of the articles I wrote about the day:
Either they don’t even know the date, or they’re lying? Why?
2. In 2009 Six Nations Councillor Helen Miller condemned the very groups & individuals Tom Keefer supports, saying they don’t speak for Six Nations and, in 2011 she told her community to stop blaming colonization & residential schools:
3. References re land claims & Tom Keefer’s gang of Marxists, anarchists, radical unionists, Palestinian groups and other anti-Israel groups
4. Real Solutions:

There is only one true path to healing and reconciliation: Truth, Justice and Apologies from Six Nations, the OPP and the Ontario government, a path that I and my associates have been pursuing for 5 years, peacefully and legally, as we have done our imperfect best to apply the lessons of Dr. Martin Luther King to the best of our abilities: 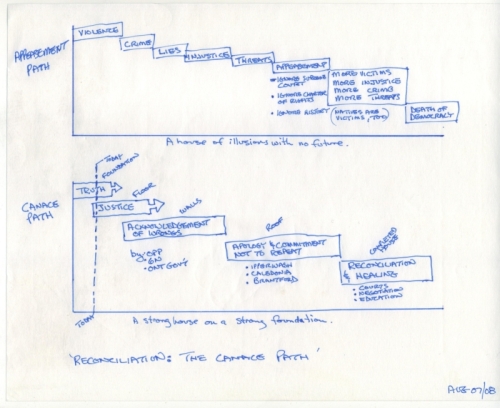 Here is a video of Tom Keefer and his associates at an anarchist conference talking about how they have to find a way to counter our application of Dr. King’s techniques because WE are making THEM look like racists:
I hope these references help you make a decision as to whether the people organizing tomorrow’s protest can be believed when they claim to want peace and reconciliation.
Finally: Please do not be tempted to use violence or angry words against the marchers tomorrow. It has never been the policy of the people I work with to mount ‘counter-protests’ even though Keefer and his native radical associates have constantly done their best to intimidate us and interfere with our rights, so I will not be in Caledonia tomorrow.
Regards,
Mark
Mark Vandermaas
519.457.0709

Like Loading...
This entry was posted in 1. VoC's MOST IMPORTANT POST, Anarchists & Unions in Caledonia, Crimes Against Democracy, CUPE, How low can they go?, MUST SEE, Native Protests - Caledonia, Tom Keefer and tagged Tom Keefer; April 28 march. Bookmark the permalink.