The week beginning Saturday, April 21, 2012 was surely one of curious contrasts for Caledonia rule-of-law activists…

During the day I was one of two non-native activists arrested for ‘breaching the peace’ as I was being assaulted by one of the occupiers on the Douglas Creek Estates in Caledonia. 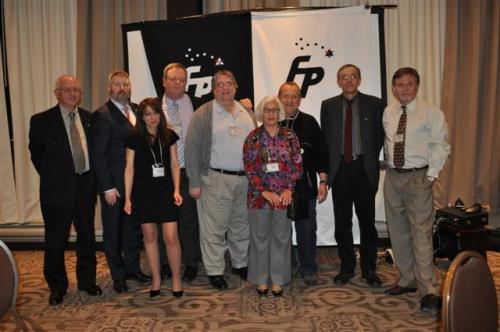 In the evening, I was honoured to be a guest speaker and presenter at the post-election dinner meeting for the Freedom Party of Ontario where executive members Bob Metz, Robert Vaughan, and leader Paul McKeever explained why the NDP, Liberals and Hudak PCs are all nearly-identical ‘red’ parties more interested in promoting ‘wealth distribution’ than in promoting wealth creation and protecting liberty.

On the way home my very apolitical wife said, ‘The penny dropped after listening to the speeches. Now I understand the difference between the parties.’

Following Paul McKeever’s very thought-provoking speech about the red parties vs. liberty I gave a short talk to help honour an amazing activist named Mary Lou Ambrogio, VP of the Canadian chapter of the International Free Press Society (seen above as evening emcee for my inaugural 2012 Israel Truth Week Conference), and presented her, on behalf of the Freedom Party of Ontario, the party’s ‘Free Speech Award’ in recognition of her tireless work in giving a voice to artists, authors, politicians and advocates who have been faced persecution by those who fear the light shone on their lies and/or crimes.

Mary Lou and IFPS-Canada were the first NGO (Non-Governmental Organization) to come to Caledonia to stand with us against racial policing, and they were co-sponsors of our 2011 ‘Caledonia: No More Nightmares‘ presentation in Ottawa.

In February 2011 she and IFPS’s Director of Communications Al Gretzky were horrified at what they saw when the OPP allowed Tom Keefer and native militants to swarm, assault and intimidate us  as we simply tried to deliver our Truth & Reconciliation ‘apology’ monement to the gates of the occupied Douglas Creek Estates. Al said later, ‘I didn’t feel as though I was in Canada!’

Al was present earlier in the day on April 21st when Jeff Parkinson and I were arrested.

Mary Lou was also one of the presenters at our ‘Ending Race-Based Policing: The Caledonia Act’ news conference at the Queen’s Park Media studio on Feb 10/12, and she was instrumental in introducing us to various Jewish groups in Southern Ontario, including the Never Again Group who were the first such group (actually 1/2 Jewish, 1/2 non-Jewish) to come stand with us against racial policing.

There is not enough room here to describe the great impact Mary Lou Ambrogio has had on our efforts to help take the story of Caledonia to a greater audience as we seek out more allies, but here is an excerpt from the Freedom Party’s account of the presentation:

“McKeever then called upon attendees Gary McHale, Mark Vandermaas, and Bjorn Larsen [President of IFPS-Canada] to assist him in presenting Freedom Party’s own Mary Lou Ambrogio with Freedom Party’s “Free Speech Award”. McHale and Vandermaas have become well recognized for their efforts to call for just law enforcement in Caledonia. Vandermaas is also recognized for “Israel Truth Week” events that he spearheaded in response to the anti-Semitic, anti-freedom “Israel Apartheid Week”.

“When activists such as McHale and Vandermaas have found themselves being silenced by violence or wrongful arrest, or ignored by the media, Ambrogio’s efforts have connected them with sympathetic media such as Metz and Vaughan’s “Just Right” radio program, and with sympathetic organizations such as the International Free Press Society and Freedom Party.

“Ambrogio has been instrumental also in giving a voice in Canada to such controversial figures as Geert Wilders, Lars Hedegaard, Lars Vilks, and Ann Coulter. On behalf of Freedom Party, the Free Speech Award was presented by Mark Vandermaas, who read the plaque’s inscription aloud: “For her dedication to the promotion and defence of freedom of speech.””

“I 100% support the work of Gary McHale and Mark Vandermaas who, as Gary pointed out, had been arrested (and released without charges) earlier that day. These gentlemen deserve proper media attention, rather than the conspiracy of silence that they get from most (except Christie Blatchford, whose book – Helpless – I recommend to all…I’ve read it, and it is gripping and a must-read). Thank you Gary and Mark for your efforts against racist, unjust, policing.

Paul McKeever, a practicing lawyer, has spoken out against the government and Opposition position that Ontario cannot direct the police to enforce the law in Caledonia:

Many thanks to Mr. McKeever, to Robert Vaughan, Bob Metz and all the Freedom Party members and candidates for inviting we ‘outsiders’ (where have I heard THAT before! 🙂 ) to your dinner; for allowing me to help honour one of your candidates (Mary Lou happens to be my Freedom Party candidate here in London, and I’m proud to say I voted for her); and for the kind welcome for the ‘Caledonia contingent.’

After being arrested on Saturday in the morning and speaking at the Freedom Party of Ontario dinner in the evening, it was a great privilege to lead a busload of people to the National Holocaust Remembrance Day ceremony in Ottawa on Monday (April 23/12) where I was honoured to light a candle as a member of the Zachor Coalition by the Canadian Society for Yad Vashem.

In the audience were Gary & Christine McHale, Merlyn & Olivia Kinrade, Al Gretzky, Steve Scheffer of the Never Again Group, my friend and Mary Lou’s from Boston, Rabbi Jonathan Hausman who flew to Canada just to ride the bus with me and my fellow travellers.

Yes, it’s been a week of curious…wonderful…contrasts.