Posted on September 25, 2013 | Comments Off on Freedom Press Canada to release VICTORY IN THE NO-GO ZONE by Gary McHale 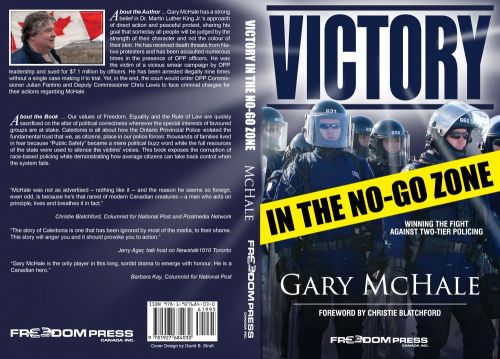 Pre-order your signed copy today OR join us for the launch at the 2013 Freedom Symposium and get a FREE copy! Click image to guarantee your seat now.

Freedom Press Canada has kicked off its pre-order campaign for Gary McHale’s upcoming book, Victory In The No-Go Zone: Winning The Fight Against Two-Tier Policing, his account of the fight against OPP racial policing in Caledonia that picks up where Christie Blatchford’s Helpless left off. It is appropriate, therefore, that the book begins with a foreword from her.

You’ve read about the agony of Caledonia’s victims in Helpless at the hands of the Ontario Provincial Police and their two-tier policing of Native militants; now read the story about the small group of Canadian patriots who followed Dr. King’s teachings in order to defend freedom and, in the process, showed Canadians how to fight back…and win.

If you want to stop police appeasement of violent radicals in Canada, and prevent European-style Islamic ‘no-go zones’ from arriving here tomorrow, you should read this book.

About Victory In The No-Go Zone (from the rear cover)

In Caledonia, thousands of families lived in fear because ‘Public Safety’ became a mere political buzz word while the full resources of the state were used to silence victims’ voices. This book exposes the corruption of race-based policing while demonstrating how average citizens can take back control when the system fails.

Victory In The No-Go Zone will be released at the Freedom Press Canada 2013  Freedom Symposium, “Freedom in Canada: Tribute or Eulogy?” on November 9th at the Old Mill Inn in Toronto. Both Gary and Mark Vandermaas, founder of the Caledonia Victims Project, will be speaking alongside other freedom advocates/authors/thinkers. Cost is $75 and includes a buffet lunch and a copy of Gary’s book.

END_OF_DOCUMENT_TOKEN_TO_BE_REPLACED

UPDATED Oct 26/12 — A great Canadian patriot, naval veteran, peacekeeper, father, husband, friend of Israel and a tireless force for justice in Caledonia has been called home.

I am saddened to report that Merlyn Kinrade, Caledonia resident and co-founder of CANACE (Canadian Advocates for Charter Equality), died after a long battle with cancer at 2pm yesterday – Saturday, October 06, 2012. He was born March 16, 1935, and passed in his 77th year.

Merlyn Kinrade lived more than 60 years of his life in Caledonia. He is a former member of the Royal Canadian Navy who served on one of the most famous ships in Canadian naval history, HMCS Haida. His service included a tour of duty in Port Said, Egypt on a United Nations peacekeeping mission during the 1956 Suez crisis.

END_OF_DOCUMENT_TOKEN_TO_BE_REPLACED

The purpose of the event is to provide journalists with information about our upcoming ‘Truth and Reconciliation Rally’ which will be held this coming Sunday, Feb 27th at 1pm. (link to news release below)

We are very pleased that Mr. Barrett and Mr. Hillier have agreed to participate in this news conference to show their support in furthering the cause of healing for Caledonia and Six Nations residents.

MPP Toby Barrett – there from the beginning

Mr. Barrett was one of the original speakers at Gary McHale’s inaugural March for Freedom on Oct 15/06, and so it is very fitting that he should take part in announcing this, the next stage towards resolution now that Christie Blatchford has finally recorded the ugly, undeniable history of Caledonia’s victims: the encouragement of those responsible to apologize so both Caledonia and Six Nations can begin a meaningful healing and reconciliation process that is based on truth, justice and respect for all human beings.

His devastatingly concise ‘Haldimand Proclamation for Peace, Order and Good Government‘ of February 11, 2008 surely must rank as one of the most shocking and historically-important documents ever written by a Canadian politician:

Barrett has previously made the Media Studio available to us on three other important occasions:

PC Leader Tim Hudak – a voice of reason when it counted

We should also note that, at a time when Ontario government ministers, including the Premier, were urging people not to march with Gary McHale in 2006 because they would be putting their lives “in danger,” current PC Leader Tim Hudak was the only voice of reason:

“…Conservative Tim Hudak said the government is ignoring the situation and needs to end the ongoing occupation. The rally shows town residents have had enough, he said. “People are not only angry, they’re damn angry,” Hudak said. “It’s an incredible double standard. On the one hand, the premier is against this rally but it’s carte blanche for the occupiers on the occupied site.” The province shouldn’t continue negotiating with Six Nations as long as the protesters remain on the site, Hudak said. “There is no reason for that occupation to continue,” he said.

We are pleased to announce that Mary Lou Ambrogio, Vice President of the Canadian chapter of the International Free Press Society – founded by Lars Hedegaard of Denmark to act as advocates for those whose freedom of expression is under attack – will be a guest speaker at our Truth & Reconciliation Rally on Feb 27th.

END_OF_DOCUMENT_TOKEN_TO_BE_REPLACED 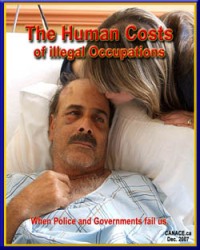 “Not Found
Sorry, but you are looking for something that isn’t here.”

I first began begging the Canadian Civil Liberties Association for help on behalf of Caledonia’s victims in early 2007 beginning with a phone call and email after we were arrested for trying to raise a Canadian flag in December 2006. Sadly, they simply refused to respond to my requests, even after I drove from London to Toronto to personally deliver a draft copy of The Human Costs of Illegal Occupations report which detailed the horrors of racial policing and the violence aided and abetted by OPP officers who refused to act against native rioters.

Read the rest of this item at: