UPDATED Feb 14/11– If one wants to understand our fight against racial policing practices in Ontario used in places such as Ipperwash, Caledonia and Brantford, one must first understand the words of the man who inspires us.

Dr. King is remembered for wisely choosing a middle path between those who wished to use violence to achieve civil rights and those who wished to do nothing so as not to “provoke” violence from those who oppressed them. Below are excerpts from a now-famous letter that Dr. King wrote from a Birmingham jail cell where he was jailed for ‘parading without a permit.’

The original letter is nine pages long. All bold fonts and titles were originally added by Gary McHale in January 2007 to help illuminate the uncanny similarities between the civil rights movement of the 1960’s and today’s struggle to restore equality before the law to Ontario for all citizens.
———————————————————– 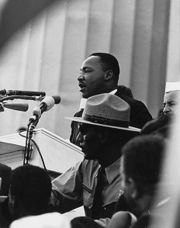 While confined here in the Birmingham city jail, I came across your recent statement calling my present activities “unwise and untimely.” Seldom do I pause to answer criticism of my work and ideas. If I sought to answer all the criticisms that cross my desk, my secretaries would have little time for anything other than such correspondence in the course of the day, and I would have no time for constructive work. But since I feel that you are men of genuine good will and that your criticisms are sincerely set forth, I want to try to answer your statements in what I hope will be patient and reasonable terms.

[We are asked many times why we March in Caledonia and not in Ottawa or Queen’s Park.]

I think I should indicate why I am here In Birmingham, since you have been influenced by the view which argues against “outsiders coming in.” …

But more basically, I am in Birmingham because injustice is here. Just as the prophets of the eighth century B.C. left their villages and carried their “thus saith the Lord” far beyond the boundaries of their home towns, and just as the Apostle Paul left his village of Tarsus and carried the gospel of Jesus Christ to the far corners of the Greco-Roman world, so am I compelled to carry the gospel of freedom beyond my own home town. Like Paul, I must constantly respond to the Macedonian call for aid.

Moreover, I am cognizant of the interrelatedness of all communities and states. I cannot sit idly by in Atlanta and not be concerned about what happens in Birmingham. Injustice anywhere is a threat to justice everywhere. We are caught in an inescapable network of mutuality, tied in a single garment of destiny. Whatever affects one directly, affects all indirectly. Never again can we afford to live with the narrow, provincial “outside agitator” idea. Anyone who lives inside the United States can never be considered an outsider anywhere within its bounds.

You deplore the demonstrations taking place in Birmingham. But your statement, I am sorry to say, fails to express a similar concern for the conditions that brought about the demonstrations. I am sure that none of you would want to rest content with the superficial kind of social analysis that deals merely with effects and does not grapple with underlying causes. It is unfortunate that demonstrations are taking place in Birmingham, but it is even more unfortunate that the city’s white power structure left the Negro community with no alternative.

In any nonviolent campaign there are four basic steps: collection of the facts to determine whether injustices exist; negotiation; self-purification; and direct action. We have gone through an these steps in Birmingham. There can be no gainsaying the fact that racial injustice engulfs this community…

[We are asked why we hold Marches and not Negotiations with OPP or Government.]

You may well ask: “Why direct action? Why sit-ins, marches and so forth? Isn’t negotiation a better path?” You are quite right in calling for negotiation. Indeed, this is the very purpose of direct action. Nonviolent direct action seeks to create such a crisis and foster such a tension that a community which has constantly refused to negotiate is forced to confront the issue. It seeks so to dramatize the issue that it can no longer be ignored. My citing the creation of tension as part of the work of the nonviolent-resister may sound rather shocking. But I must confess that I am not afraid of the word “tension.” I have earnestly opposed violent tension, but there is a type of constructive, nonviolent tension which is necessary for growth. Just as Socrates felt that it was necessary to create a tension in the mind so that individuals could rise from the bondage of myths and half-truths to the unfettered realm of creative analysis and objective appraisal, so must we see the need for nonviolent gadflies to create the kind of tension in society that will help men rise from the dark depths of prejudice and racism to the majestic heights of understanding and brotherhood.

The purpose of our direct-action program is to create a situation so crisis-packed that it will inevitably open the door to negotiation. I therefore concur with you in your call for negotiation…

[On Dec. 13/06 Mayor Trainer stated the OPP should arrest us for not having a parade permit.]

Sometimes a law is just on its face and unjust in its application. For instance, I have been arrested on a charge of parading without a permit. Now, there is nothing wrong in having an ordinance which requires a permit for a parade. But such an ordinance becomes unjust when it is used to maintain segregation and to deny citizens the First Amendment privilege of peaceful assembly and protest.

I hope you are able to see the distinction I am trying to point out. In no sense do I advocate evading or defying the law, as would the rabid segregationist. That would lead to anarchy. One who breaks an unjust law must do so openly, lovingly, and with a willingness to accept the penalty. I submit that an individual who breaks a law that conscience tells him is unjust and who willingly accepts the penalty of imprisonment in order to arouse the conscience of the community over its injustice, is in reality expressing the highest respect for law.

Of course, there is nothing new about this kind of civil disobedience. It was evidenced sublimely in the refusal of Shadrach, Meshach and Abednego to obey the laws of Nebuchadnezzar, on the ground that a higher moral law was at stake. It was practiced superbly by the early Christians, who were willing to face hungry lions and the excruciating pain of chopping blocks rather than submit to certain unjust laws of the Roman Empire. To a degree, academic freedom is a reality today because Socrates practiced civil disobedience. In our own nation, the Boston Tea Party represented a massive act of civil disobedience.

We should never forget that everything Adolf Hitler did in Germany was “legal” and everything the Hungarian freedom fighters did in Hungary was “illegal.” It was “illegal” to aid and comfort a Jew in Hitler’s Germany. Even so, I am sure that, had I lived in Germany at the time, I would have aided and comforted my Jewish brothers. If today I lived in a Communist country where certain principles dear to the Christian faith are suppressed, I would openly advocate disobeying that country’s antireligious laws.

[The real problem is with the ‘moderates’]

I must make two honest confessions to you, my Christian and Jewish brothers. First, I must confess that over the past few years I have been gravely disappointed with the white moderate. I have almost reached the regrettable conclusion that the Negro’s great stumbling block in his stride toward freedom is not the White Citizen’s Counciler or the Ku Klux Klanner, but the white moderate, who is more devoted to “order” than to justice; who prefers a negative peace which is the absence of tension to a positive peace which is the presence of justice; who constantly says: “I agree with you in the goal you seek, but I cannot agree with your methods of direct action”; who paternalistically believes he can set the timetable for another man’s freedom; who lives by a mythical concept of time and who constantly advises the Negro to wait for a “more convenient season.” Shallow understanding from people of good will is more frustrating than absolute misunderstanding from people of ill will. Lukewarm acceptance is much more bewildering than outright rejection.

I had hoped that the white moderate would understand that law and order exist for the purpose of establishing justice and that when they fail in this purpose they become the dangerously structured dams that block the flow of social progress. I had hoped that the white moderate would understand that the present tension in the South is a necessary phase of the transition from an obnoxious negative peace, in which the Negro passively accepted his unjust plight, to a substantive and positive peace, in which all men will respect the dignity and worth of human personality. Actually, we who engage in nonviolent direct action are not the creators of tension. We merely bring to the surface the hidden tension that is already alive. We bring it out in the open, where it can be seen and dealt with. Like a boil that can never be cured so long as it is covered up but must be opened with all its ugliness to the natural medicines of air and light, injustice must be exposed, with all the tension its exposure creates, to the light of human conscience and the air of national opinion before it can be cured.

In your statement you assert that our actions, even though peaceful, must be condemned because they precipitate violence. But is this a logical assertion? Isn’t this like condemning a robbed man because his possession of money precipitated the evil act of robbery? Isn’t this like condemning Socrates because his unswerving commitment to truth and his philosophical inquiries precipitated the act by the misguided populace in which they made him drink hemlock? Isn’t this like condemning Jesus because his unique God-consciousness and never-ceasing devotion to God’s will precipitated the evil act of crucifixion? We must come to see that, as the federal courts have consistently affirmed, it is wrong to urge an individual to cease his efforts to gain his basic constitutional rights because the quest may precipitate violence. Society must protect the robbed and punish the robber.

I had hoped that the white moderate would see this need. Perhaps I was too optimistic; perhaps I expected too much…

Yours for the cause of Peace and Brotherhood

Are we creating tension? Are we provoking violence? Do ‘outsiders’ belong in Caledonia?

I freely confess that none of the people in this struggle can ever compare to such greatness, although we certainly do compare many aspects of Dr. King’s struggle for human rights to this struggle. We can also aspire to live up to Dr. King’s ideals as we tried to do in a small way on Dec 1st when those of us who were attacked with hate and/or violence refused to retaliate in kind.

Photo of Dr. King giving his ‘I have a dream’ speech in Washington, from Wikipedia citation for Martin Luther King, Jr.

One response to “Lessons from Dr. King”