On Wednesday, March 14, 2007 Gary McHale, Mary-Lou LaPratte, and I held a news conference in the Media Studio at Queen’s Park to release ‘The Ipperwash Papers,’ a collection of over 400 pages of documents that reveal the suffering of innocent Ipperwash residents at the hands of native criminals, and by Department of National Defence and OPP Two Tier Justice policies during 3 separate land claims.

The Ipperwash Papers also exposes the shameful secret of how the Ipperwash Inquiry prevented residents from testifying and suppressed all evidence of their suffering. Out of 139 witnesses called, not one was a full-time resident. During an inquiry that cost $20M and lasted 3 years residents were given a total of just 90 minutes to address the Commissioner on June 21/06 – at the height of the Caledonia crisis. Even that miniscule pretence at fairness was apparently too much – the minutes of the meeting were sanitized to give the false impression there were no real problems between residents and natives.

During the news conference – made possible by MPP Toby Barrett who made the Media Studio available to us – we predicted – two and a half months before its report was released – that the Ipperwash Inquiry would never be able to provide any credible recommendations designed to prevent future victims of landclaim lawlessness by native protesters. Unfortunately, for the people of Caledonia, we were absolutely right: out of 100 recommendations made by the Inquiry not a single one specifically addressed the issue of violence against innocent third parties during land claims.

One must wonder, therefore, how any body – government or police – can use the Inquiry’s recommendations as justification for abandoning the innocent victims of native extremism. Unfortunately, neither the media at large or our province’s politicians have chosen to ask this vital question of the McGuinty government.

Silence in the Ontario Legislature as innocent people are victimized

After concluding our press conference we left copies of our extensive press kit for the Premier and leaders of the Opposition parties. Unfortunately, despite the McGuinty government’s consistent use of the Ipperwash Inquiry to defend its shameful treatment of the people in Caledonia, not a single MPP has yet stood in the Legislature to confront the government with the truth – that innocent people are being victimized because the Ipperwash Inquiry suppressed evidence.

Even in October 2008 when the new Aboriginal Affairs Minister, Brad Duguid, used the Ipperwash Inquiry to justify the government’s refusal to hold hearings into the Caledonia crisis, not one MPP confronted the Liberals with the truth.

More people destined to be sacrificed on alter of political-correctness

On a personal note, I can’t tell you that ‘The Ipperwash Papers’ is an easy read. As we were going through the thousands of pages of documents, I broke down in tears of rage when I realized that the failures of the Ipperwash Inquiry meant that more innocent people – in Caledonia and other towns in the future – were destined to be sacrificed on the alter of political-correctness.

Mary-Lou LaPratte put her arms around me as I wept, asking over and over again through my tears, “How could my country allow this to happen? 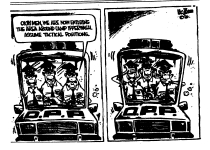 The Ipperwash Papers should be required reading for every Canadian citizen who wants to know the truth about the shattering effects of politically-correct policing and crime on innocent people during land claim disputes.

NOTE: Every media kit included a CD with a video of ‘Dancer‘ reading her ‘Road of Hope’ pamphlet.

On Nov 13/10 the legendary Peter Worthington, co-founder of the Toronto Sun, became the first journalist in Ontario outside Caledonia to write about our work on the Ipperwash Papers project in Caledonia crisis of facts. He was the first to take a swipe at the failure of the Opposition to denounce the misuse of the Inquiry’s recommendations. This article follows on his first column about the Caledonia crisis – Helpless in Caledonia – written by him on Oct 27/10 after the release of Christie Blatchford’s book Helpless.

The first journalist to report on the project was veteran broadcast journalist Doug Aldridge of ‘The Right Side’ (killed in a car crash April 15/08) who interviewed Mark Vandermaas at length on June 04/07.

The first print journalist to write a story inspired by the project and to mention it by name was Kevin Steel of the Western Standard in Protection Racket: An Ontario judge glosses over illegal aboriginal acts at Ipperwash which was published July 02/07. It relied heavily on an interview with Mary-Lou LaPratte, and it quoted Mark Vandermaas, although it did not comment at any length on the Ipperwash Papers project or its findings.

In February 2009, the Regional News in Caledonia was the first publication to allow us to tell the Ipperwash Papers project story in our own words in a two-part series entitled, McGuinty’s Ipperwash Cover-up: The Caledonia Legacy – upon which Peter Worthington based his article. A 1600-word version of this article was originally written by agreement for the National Post – which reneged on its promise to publish it in 2008.

2 responses to “The Ipperwash Papers”